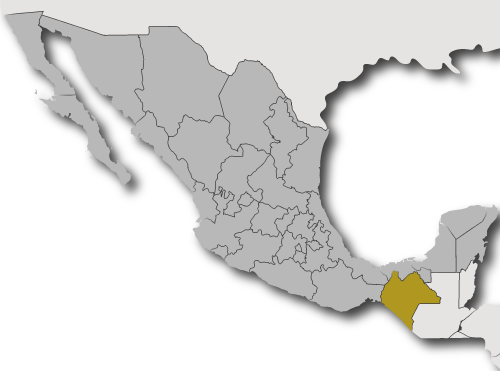 Chiapas is a small state in southern Mexico bordering Guatemala. Its mountainous highlands, dense rainforest, pristine lakes, rivers and national parks are dotted with Mayan archaeological sites and Spanish colonial towns. This beautiful state has a particularly interesting story not only of its historic Mayan civilization, but also because of its resistance to the Spaniards and the Mexican government. The Spaniards arrived in Chiapas in 1522 when Christopher Columbus sent tax collectors to the region, but it wasn’t until 1528 that Spaniards were able to conquer it. Since then, Chiapas has resisted control and domination of its territory by Spain, Mexico and Guatemala struggling to be a nation of its own. In 1821, after the Mexican independence was finalized, Chiapas fought to keep its own identity as a nation, but the Mexican government forced them to join the Federal Republic in 1824. Chiapanecos still believe they can and should be an independent nation. Chiapas has the biggest electric dam in Latin America, which produces 45% of Mexico’s electricity and is the 4th biggest electricity producer in the world. The Presa de Chicoasen is located only 41 kms from the capital of the state, Tuxtla Gutierrez. This state hosts a wide variety of beautiful places to visit, including El Cañón del Sumidero, Cascadas de Agua Azul, Palenque, to name some of the most famous.

Through the years, Chiapas has become the No 1 producer of coffee in Mexico. Its excellent geographical location, climate and rich volcanic soils, makes for perfect condition for the coffee plants to grow. Coffee was introduced to Chiapas back in the 18th century by the Spaniards. The indigenous people in the region discovered the production provided the state with a great opportunity for crop development and use that land help sustain the local inhabitants. There are thousands of families with small “parcelas” dedicated to growing coffee in the mountains of the Sierra Madre de Chiapas. They work as a family to care for the plants and participate in collecting the coffee cherries. Because some of them can’t afford to buy the equipment needed to process the coffee, the beans are often sold to bigger farms for processing. Chiapas has distinguished itself for its constant peruse of innovative ways to improve the way coffee is grown and processed, not only to achieve the highest quality of coffee but to sustain and protect the land. The love and devotion Chiapanecans invest in their crops can be tasted in the rich full flavor of their coffee that has been recognized as one of the best coffees from the southern region of Mexico.

Get to know our Chiapas coffees

An exquisite selection of the best coffee beans from Chiapas, is waiting for you to taste them.
Shop Now